I’m sure you’ve probably heard the word asbestos a few times in your life. Especially if you live in Canada, in which you’ve most likely heard it A LOT. You also probably know that it’s a harmful substance found in a lot of building materials, but why was it used so extensively and what is it exactly? Ethical Waste Services has all of your questions answered.

Let’s start with some history. Asbestos has been used for thousands of years dating back to the ancient Egyptian era about 4000 B.C when it was used to make cloth and paper, often used to mummify the rich after death. It’s been used in tons of materials since then, but it wasn’t until the late 1800’s that mining asbestos started to boom. And by 1970 it was used in 95% of homes in Canada.

Not only was it in almost every home, but it was also in most parts of homes as well. This picture shows all the possible places you might find asbestos in your home.

So why was it used so much? In the 1950’s and 60’s it was called the Miracle Mineral for a reason. It’s fireproof, super strong, sound insulating, heat insulating, cold insulating, waterproof, chemical resistant and resistant to electricity. Just to name a few. It’s basically the perfect mineral not to mention it’s highly accessible and cheap. The only downside is that it causes cancer. Some things are just too good to be true.

For thousands of years no one suspected it was a deadly substance. Then in the 70’s retired workers from mines in the early 1900’s started coughing up blood and were struggling to breath. Thus began the decline of asbestos and by 1990 it was banned for use in Canada.

Prior to its decline Asbestos was Canada’s gold mine. With a Giant mine in Northern B.C and another in Central Quebec it became Canada’s largest export and by a huge margin. It was Canada’s #1 economic asset for years. Which is why the fight to stop exporting spanned decades, only ending in 2018. While it was banned for use in Canada in 1990 we exported it to foreign countries like India and China until 2018.

In 2016 Canadian Incident reports recorded 445 cases of Mesothelioma which can directly be caused by exposure to asbestos. So what happens when you’re exposed to Asbestos? Well, nothing. Not until you’ve been breathing it everyday for years. Then you’ll start to see some problems. In fact, most of us have most likely already been exposed to asbestos a number of times in our life.

Asbestos can also cause Asbestosis which occurs when asbestos fibers become caught in the membrane of your lungs and with no way to get them out your body tries to heal over them creating scar tissue. When the entirety of your lungs are covered in asbestos they eventually become covered in scar tissue making it impossible for oxygen molecules to enter, eventually causing death.

In conclusion Asbestos is the best deadly material to ever be made, which is why it’s in thousands of building materials and even tools. While it can cause very serious long term health effects it won’t harm you by your first or even third exposure.

So if you encounter Asbestos in your home or are thinking about renovating your house built before 1990 do not panic. We’ve noticed that a real fear and paranoia of asbestos has been going around and we want to tell you not to worry. Call a professional such as Ethical Waste Services. We will test your home and remove all hazardous materials safely, keeping you and your family at ease and safe during and after the process. 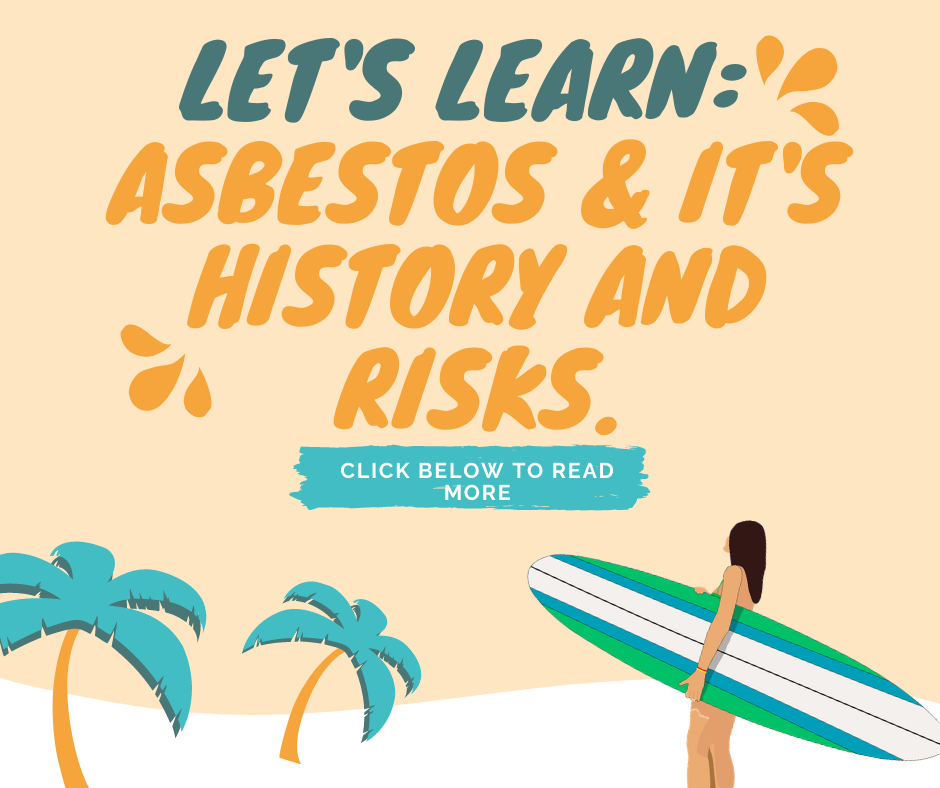